Our talented artists duo NASGA and CIIMERA taking over by storm and smashing the TOP 100 BEATPORT  Big Room Chart reaching TOP 21  with their new festival anthem release SURVIVE a perfect combination of elements such as big kick drum , catchy big leads melody drop and uplifting break followed by the amazing strong and energic vocals by the talented singer EILEEN JAMIE wich has collaborated in the past with names like AVICII, AUSTIN LEEDS and many more.The track has been received an amazing feedback so far also been played by FENIX into his latest podcast SAY WOW SESSION #30 and also by many other djs and producers.

Make sure you check out this track as it’s a track you can’t miss it specially if you are a music fan of EDM music. 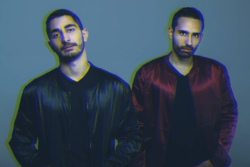 NASGA is a Venezuelan DJ and music production duo composed by Marco Agnese and Fabrizio Agnese, two brothers, whose main focus is to stand out as remarkable DJs & Producers on the electronic music scene, delivering great music pieces and performances all over the world.

NASGA was created by using the first syllable from their last two names: Agnese Santana, reading them as AGSAN, but backwards. NASGA is focused on producing and mixing genres such as Big Room, Dance and Future House.

Since an early age, the two brothers got interested in music. Together, they started to learn music theory and how to play the guitar and the drums; they were influenced by a wide variety of music genres as: Rock, Metal, Trance, Dance, Progressive House and Big Room.

The DJ and producer Sandro Roos (CIIMERA) was born in the year 1994 in Germany. After finishing the school he started an traineeship as an electrican. In the year 2012, he started with his hobby as a DJ/producer and gained a lot of information and so his interesting for EDM music grew more and more, such as the mix and produce of tracks. His genre is Electro House, BigRoom, Progressive House.