From Mexico’s Electronic Dance Music scene Alan Salomon joins our label with his brand new Big Room track called “KICK IT” spreading some heavy vibes as this tune has that festival rave energy and at the same time has a clubbing groovy vibe. The strong catchy vocals on the break gives this track some great dancefloor riddim and creates an uplifting atmosphere.

The track has already made some big noise as it reach TOP 100 Big Room Beatport within 2 weeks since the release and reachead #45 position. 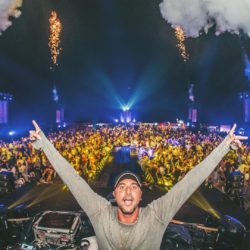 Alan Salomon has been named as one of the Top 5 DJ´s to follow in Latin America and has worked with collaborations with bands such as Moenia, OK Go and The Cuckoos. A reference in the electronic music scene in Mexico.Alan Salomon mixes and produces sounds of EDM, Big Room and Electro House.

As a public figure, Alan Salomon is the 2017 cover of the sexiest people of Mexico and has shared stage with the biggest names in the Music Industry from around the world.

He has also collaborated with brands such as Hugo Boss, Bershka, Forever 21, Coach, Pink, Adidas, Nike and Burberry as an ambassador or model. He is also the actual cover of the DJ`s that are dominating Mexico and holds a residency at a radio show on EXA 104.9 FM, one of the nation most listened radio stations.

Alan Salomon has become an elite DJ and household name in the music scene with the biggest festivals and clubs behind his back.